Sandugo de Kuradang - The Most Fun Sandugo Yet!

22 July 2016 - For once, a Bohol Day brought us a Sandugo event where the performers were genuinely having fun -- more smiles, vigour and energey and less strained & exhausted faces (the late afternoon start sure helped) --  which inspired the audience and in turn inspired the performers. It also helped that the familiar fun(ny), upbeat melody, lyrics and dance steps (!) of the Kuradang that harked back actual fiestas and family celebrations had us all beaming and wanting to join in the fun.

This year's Sandugo Street Dancing Committee took their chances in bringing back the Sandugo to its basics, essentially back to the people - and we're glad. Piskay.

Kuradang-based Sandugo is not only a colorful remembrance of things past, it also opens up possibilities for future concepts both for the Sandugo (which is historically iffy anyway, IMO) and what's needed most in the world today (e.g. inclusivity over exclusivity); and kuradang (e.g. evolve its courting theme into more gender-equitable, gender-inclusive concepts; connect it to the 'eskrima' tradition). And how about a post-modern bare-bones kuradang? That should be exciting. 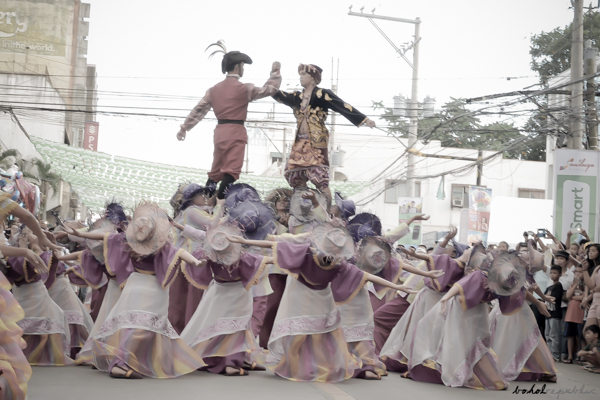 While there were clear winners among the eight performing contingents, Lumad Napoanon (Barangay Napo, Loon), Holy Name University and Dr. Cecilio Putong National High School (DCPNHS) aka "Bohol High", among the crowd favorites, -- because of the basic kuradang movements and music shared by everyone

This is not to discount the - by the winners, of course.

Lumad Napoanon (choreographed by Nelson "Kookie" Relayosa), the shoo-in for the top prize, was indeed declared the Grand Champion, the Best in Street Dancing and Most Colorful Contingent. Their costume, although, somewhat remnant of the past Sandugo's and most other cultural festivals, especially the 'head gear', did set them apart from the rest, who adhered to the more traditional 'kuradang' and 'subli' garb (I believe HNU's long dresses and scarves could've covered up the intricacies of their hand and feet movements).

And of course their main kuradang pair, the more elderly, therefore more adept Jose Zuasola Lugo and Julie Rebucas Murcia, stole the show -- they were awarded the Kuradang King and Queen!

Comprising the board of judges were no less than Prof. Felipe Mendoza de Leon, Chairman of the National Commisssion for Culture and the Arts (NCCA); Marichu Tellano, Deputy Executive Director of the NCCA; Shirley Halili Cruza, President of the Halili-Cruz School of Ballet; Prof. Eric Zerrudo, Executive Director of the UST Center for the Conservation of Cultural Property; and Maribel Legarda, Artistic Director of the Philippine Educational Theater Association (PETA).